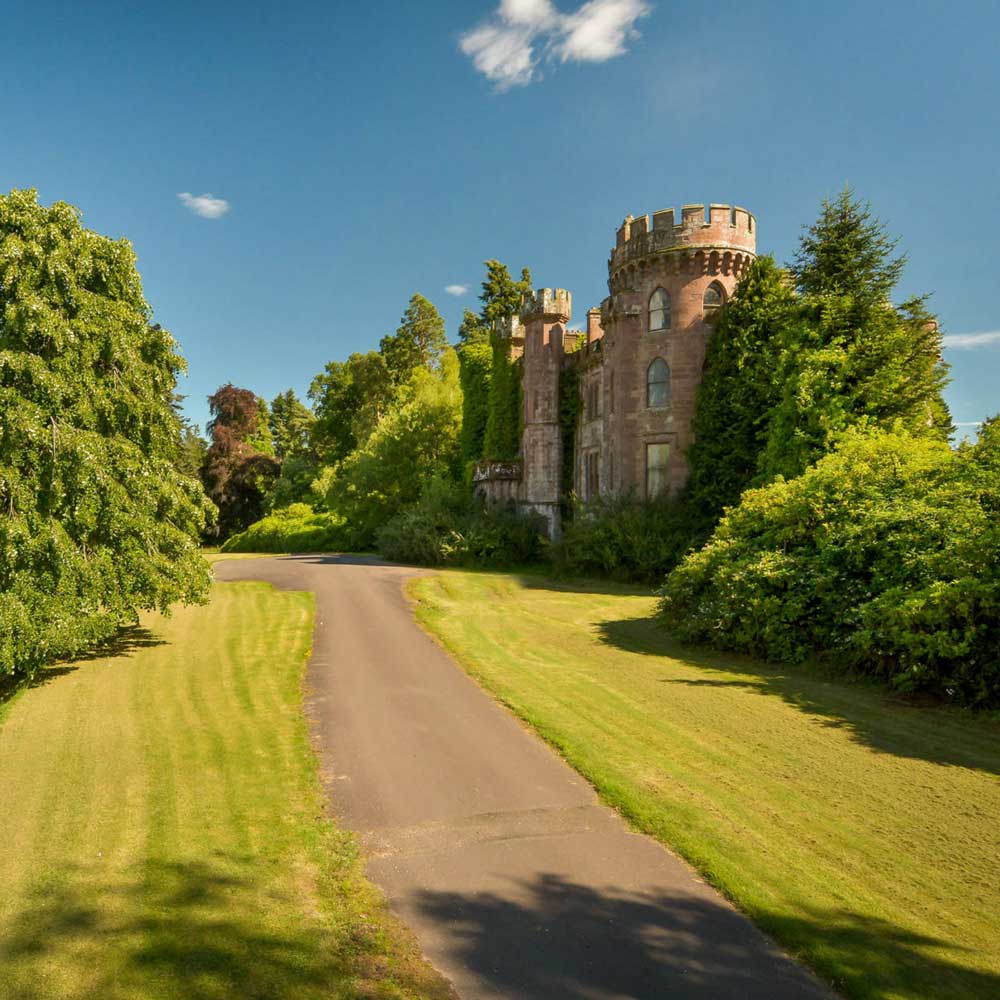 We are Tracey & Robbie and we stumbled across Culdees whilst visiting family in 2018. The Castle had been languishing in a state of disrepair for over 50 years but still a magnificent building. It was love at first site and we eventually became the new custodians of Culdees Castle and Mansion House in July 2019. We live in the mansion house next to the castle with our children and Tracey’s parents. Everyone in the family is committed to restoring the site into something magical for future generations to enjoy.

We have spent a lot of time clearing the site and are now concentrating on a full renovation plan. The first phase now completed is our luxury Glamping site and on-site shop/tea room. We aim to clear the castle’s rear courtyard by 2021 and turn this into a unique wine bar. We are hosting our first weddings in 2021 and plan to open the estate up for local events and private hire in 2022. 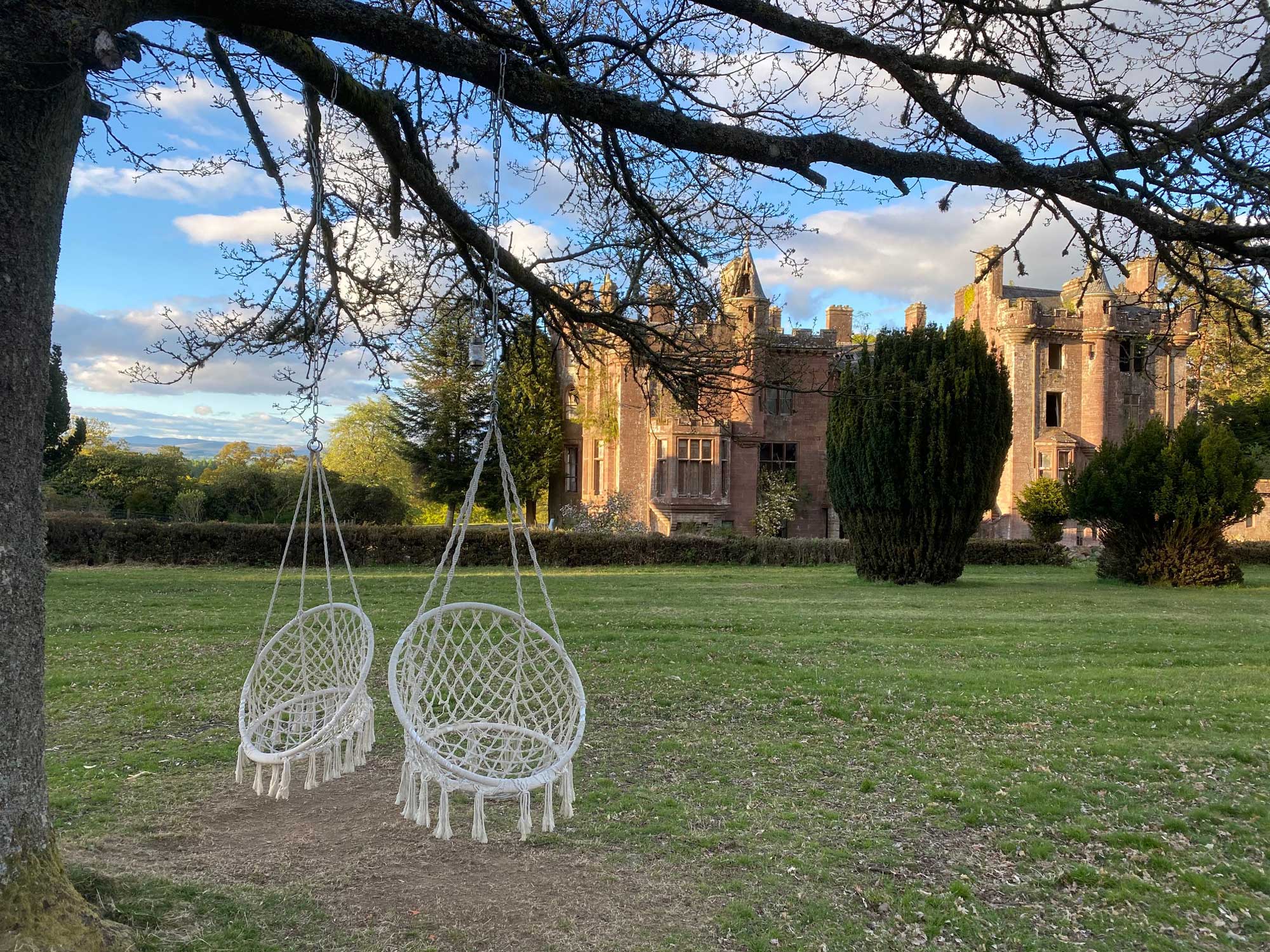 The Castle has had four Custodians in its time so far:

The land on which the castle was built was originally gifted to the Drummonds after the son of clan Chief Sir Malcom Begg, fought at the battle of Bannockburn in 1314.

The gifted land was a reward for fighting alongside Robert the Bruce. A monastery of the Culdee Monks originally stood in the field now known as South Park. Records and stain glass dating back to the 1400’s speak of the monastery at Culdees. Today the original footprint can still be seen amongst the remaining ruins.

The first foundation stone was laid at Culdees on October 15th 1810 by a procession of 200 stone masons. The castle was designed for Lieutenant General James Drummond by Scottish architect James Gillespie Graham in 1810. The castle is a three storey and basement mansion in Gothic red ashlar. The designer was also notable for designing some of Scotland’s most well known buildings. Some of his principal churches include St Andrew’s Cathedral in Glasgow and the imposing Highland Tolbooth Church – now known as The Hub – in Edinburgh Extensive additions were carried out to the structure by David Bryce in 1866 and an interior makeover by Lorimar. It was baronialised and extended with a new wing and Chapel a year later. 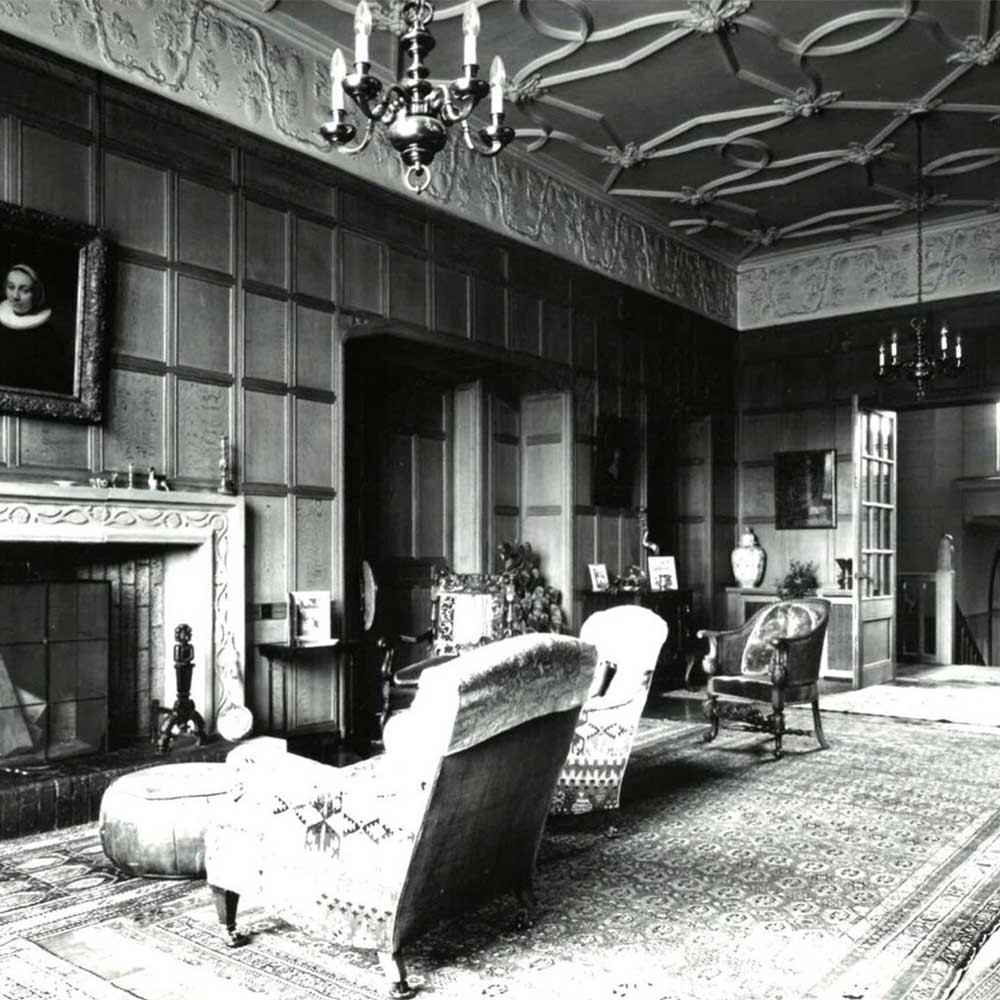 After Drummond’s death the Castle was purchased by Robert Napier Spier, a layman in connection with the Episcopal Church in Scotland, and then later passed to his son.

Robert Thomas Napier Speir was born on 15 October 1841, the only son of Robert Speir of Culdees and Burnbrae and Mary, daughter of Sir William Milliken Napier of Milliken Park, Renfrewshire and nephew of Lady Aymee Clerk of Penicuik. He was educated at Eton and Christ Church Oxford, and married the Hon Emily Gifford, 3rd daughter of 2nd Baron Gifford in 1868. Prior to inheriting the estates he was a captain in the 4th Battalion Argyll & Sutherland Highlanders. His four sons all entered the army; there were two daughters.

The Speir family fortune was derived from Groves, Speir and Company.

Speir was forty years chairman of the Executive Committee and Home Mission Board of the Scottish Episcopal Church and the author of one of the essays on church reform edited by the Bishop of Birmingham. In November 1883 the Rev Farquhar of St Ninian’s Cathedral, Perth stayed with him at Culdees when taking the service at Muthill and described him as a ‘tall, handsome, aristocratic-looking man in the prime of life … he is a church architect and has erected several small churches; he makes beautiful coloured windows with his own hands and paints beautifully on china etc; there is something very manly about him.’ How Speir acquired his architectural skills is not known: his practice was confined to Episcopal churches where family or friends had a controlling interest. He died at Culdees on 3 April 1922.

There is a stained glass to his memory in Paisley Abbey. 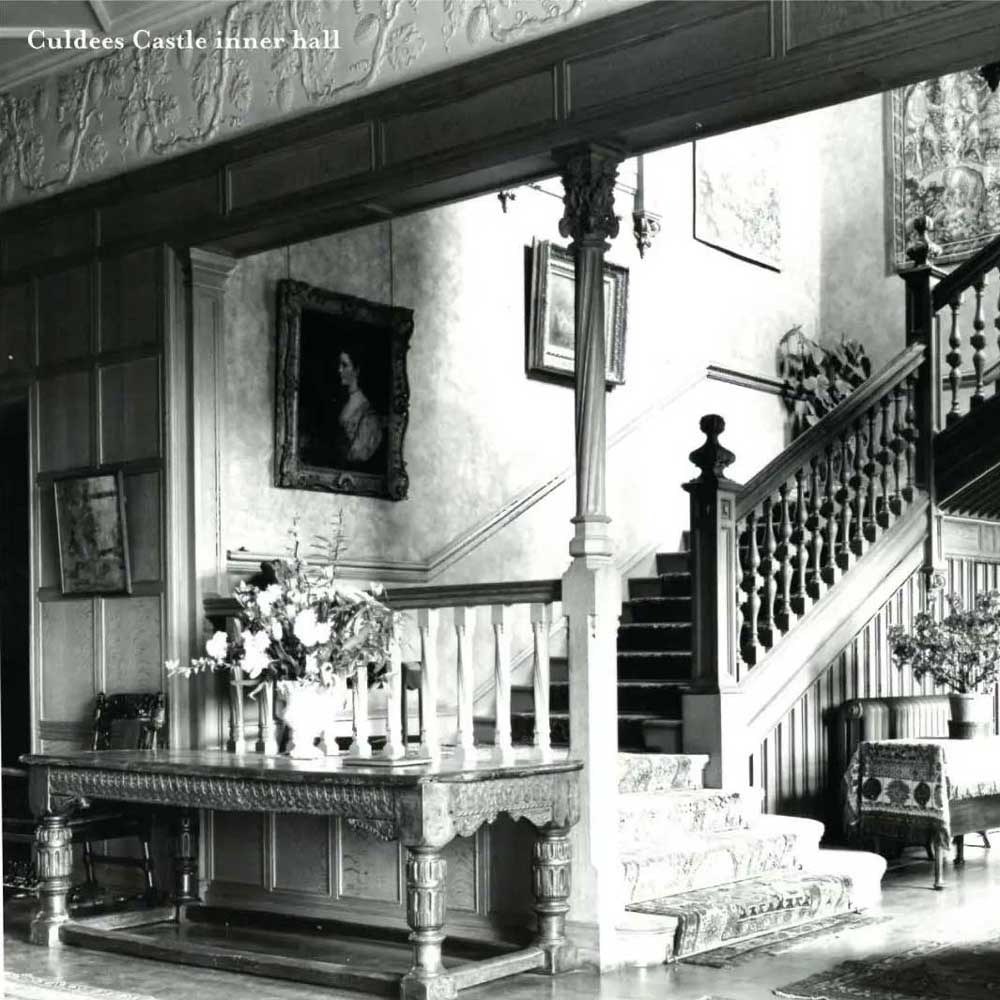 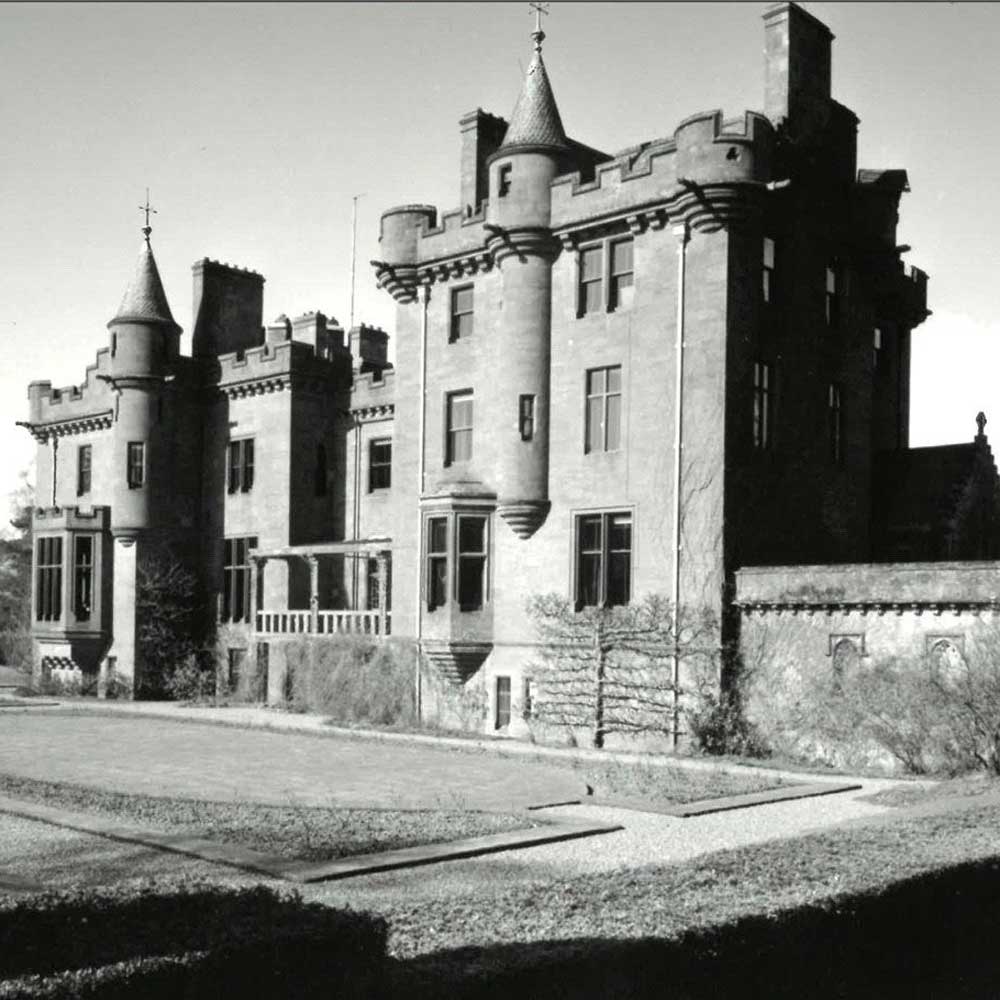 John James Maitland Gardner was born in 1874 and married Miss Margaret Thomson born 1878. John James was the grandson of Archibald Gardner, and son of Daniel Robertson Gardner. The family business was prestigious furniture and cabinet maker’s store in Glasgow called A Gardner & Son. (Now Wetherspoons) John and Margaret moved into the Castle as their family home. They had one son, Major David Maitland Gardner who married Miss Barbara Dundas. The estate was passed to them when John James died. David was a Royal Artillery Major in the war and was made a Member of the British Empire. He was also awarded a Territorial Decoration.

David and Barbara had three children, Jane, Maggie and Colin Maitland Gardner. They resided in the Castle until 1968 but moved out after discovering extensive damage caused by Dry Rot. The castle interior was stripped and most things put up for sale. They built a Mansion house next door and continued to live at Culdees. The estate was passed to Colin Maitland Gardner when his mother died in 2002. He had sold the family furniture business and turned his hand to farming the extensive estate at Culdees and continues to do so today. 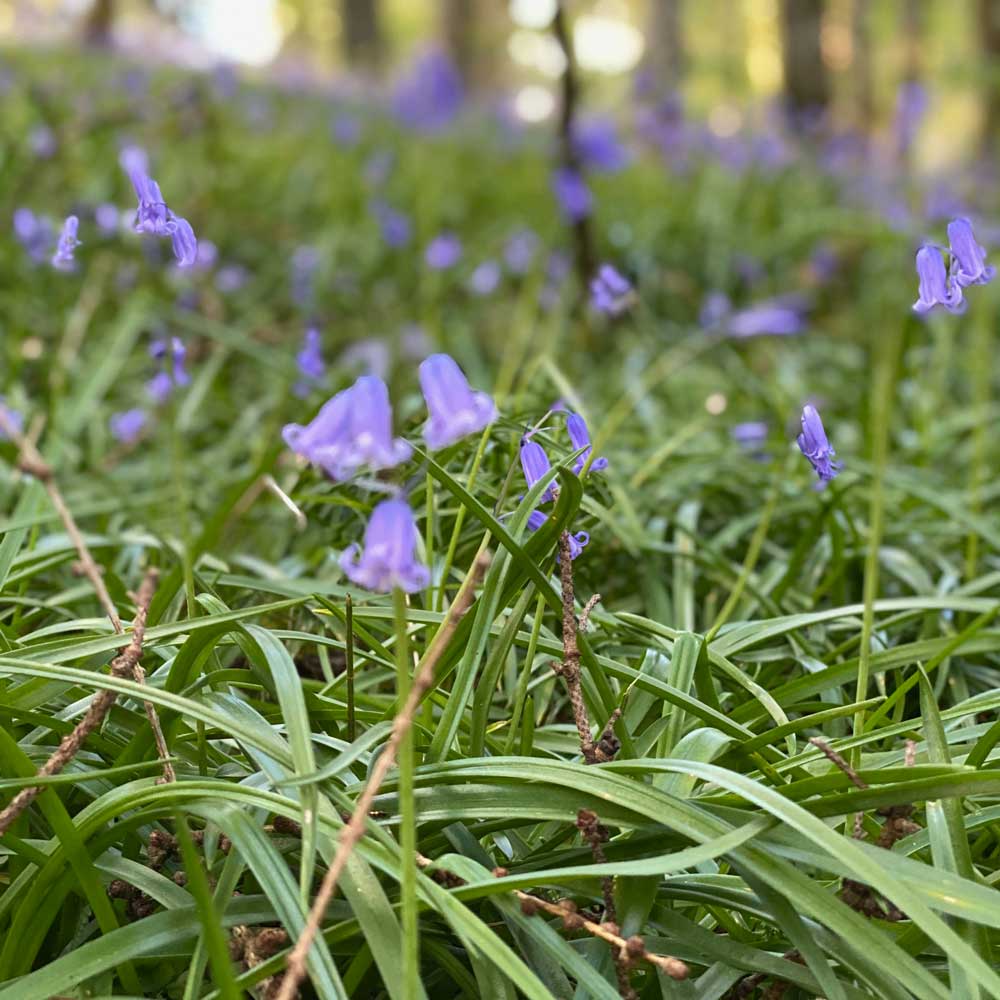 Tracey Horton from Deal in Kent purchased the derelict Castle, Mansion House and portion of land in July 2019. She resides in the Mansion House next door with her Scottish Partner Mr Robbie Beaton and their extended family. Tracey is an experienced property developer and also has a long career history in senior management and events.

The castle has crumbled greatly internally but the outer walls still stand strong and a magnificent stone spiral staircase also remains leading to the upper floors. The East wing roof is also mainly intact. The family plan to restore as much of the Castle to its former glory as possible with funding being generated from Glamping, weddings and Events that will take place on site.